It is no secret that Remington P. Cat was my baby. My heart still aches for him and probably always will, I have his picture by my bed and do not go to sleep at night without saying good-night to him, I still cry when I sit and think about him, like right now…

I know that when you lose a pet, there is absolutely no way to replace him. It’s silly to even try. But I also know that the hole left by the loss of a pet can be too much to bear, and sometimes you need a little help to ease the pain. So we took a trip to the Santa Fe Animal Shelter, not to try and replace Remi, but to share the love that we had for him. Remi came from a shelter, so it seemed only fitting that his successor should do the same.

I love being able to help an animal from the shelter, but hate that we have to leave so many behind, especially since they, too, so desperately want a place to call home. Since bringing home all of the kitties was not an option, we had to pick one.

Everyone really liked “Denmark,” a little tabby boy who had spent most of his life in the shelter. He started out at a shelter in CA, and was transferred to Santa Fe when they ran of space. He is about 11 months old now, and just a spunky little thing. Liam had always wanted to name a cat “Gatsby,” and this was his chance.

Gatsby and Hamish took a little while to get used to each other, but now they play just like brothers. One will hit the other then take off running, and the chase is on. Charbie loved Gatsby from day one, but Gatsby was not used to dogs, so he took a little getting used to. Now they act like they have known each other forever.

Gatsby did not have a lot of loving or attention in the early part of his life, so he is still not quite sure what to do when we pick him up or just try to love on him, but he is getting better. He is starting to purr a little more often and lets me hold him for a little longer before he starts chewing on my hair or trying to eat my ears. Every now and then he will crawl under the covers at night and purr, licking my fingers as I pet him, and my heart melts.

Welcome to the family, Gatsby, we are so happy that you are here. 🙂 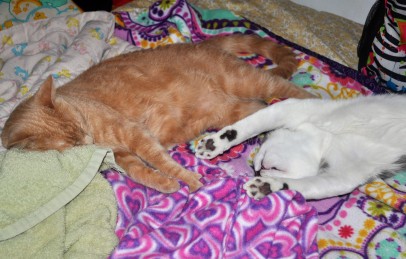 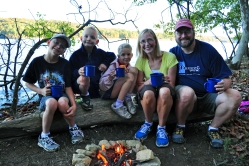 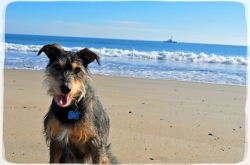