When we first bought Waldo two years ago, the back bedroom was set up with a queen bed. We wanted to turn it into a room for the kids, so we set about remodeling it. Unfortunately we were short on time, so we had to make it quick. We wanted each of the kids to have their own space, so we gave each of them their own bed and desk.

The kids rarely used their desks, making them a waste of space, and there never seemed to be enough space for storage, meaning their room was always a mess. Since we had to replace the floor due to a leak in the toilet, it seemed like a good time to make some changes. The boys were very eager to tear their room apart. Ask them to clean up and they whine like you’d never believe, but ask them to tear something apart and they are all over it. Go figure.

Rob is a big fan of gorilla glue so it was a little tough getting the old beds and desks out, but once we finally did, we set about painting the walls a beautiful shade of… school bus yellow. The kids picked it out and while we were a little skeptical at first, it actually turned out pretty nice. It looks much brighter in pictures than it does in person, probably because of the camera flash. We also put down new linoleum squares. Not much of the floor actually shows, so we just bought the cheapest tiles we could find. These particular beauties were a whopping $.39 each. 🙂

We decided that instead of a triple bunk, we would do two twin bunks on each side of the room. This would give the kids a little more head room since they do most of their reading, work and play on their beds. Rob can build pretty much anything which makes creating new things so much easier. A little lumber, a hand saw, some wood glue and he was ready to get started. 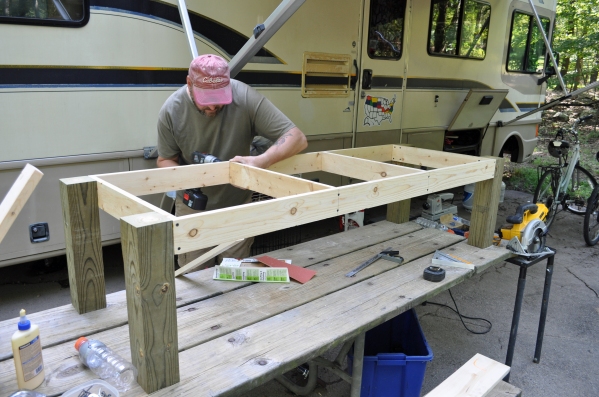 We decided that instead of painting the beds, we would stain them. They look nice and clean and the kids won’t outgrow the colorful paint.

With one set of beds done, Rob was able to start on the other set. We also put in a dresser, which doubles as a turtle tank stand, and all of the kids’ books went on a bookshelf at the end of one set of beds. The kids actually have a little more floor space than they did before and with the beds being a little higher off the floor, we are able to put totes under them for storage.

With only three kids and four beds, we were able to create a little closet. Shoes and jackets were always in the way, and now we have a place to put them. The kids also have their dirty clothes basket in the closet, making it easier for them to actually take care of their clothes without just leaving them on the floor.

I still need to make privacy curtains for each of the beds, including the closet, and there is no space for a curtain rod, so I pinned old curtains over the windows for now. I will have to come up with new coverings for the those as well. We will also pick up a new floor rug, but other than that and a little art on the walls, the room is pretty much complete. I really like how it turned out. Rob did such an amazing job.