Today, after driving a surprising 14 miles of dirt, mountainous, narrow, twisty crazy roads, we finally arrived at the trail head of the hike we wanted to do. Boogerman, it was called, which seemed fitting for us. We parked the car, grabbed our packs and headed a few yards back down the road to the trail.

Surprise! The foot bridge was gone, so the only way to begin the trail was to cross the creek. Rob studied it for a minute, and decided that not only was it indeed crossable, but that we were just crazy enough to do so. The water was very, very cold, but we slowly made our way across.

It was supposed to be warm today, so we figured we would dry out while we were hiking. We made our way down the trail and soon came upon a bridge. The best thing I can say about this bridge was that at least it existed. But the winter had been hard on it and it had been beaten down by many logs.

Surprise!  This bridge was more of an obstacle course. It was almost completely sideways from all the logs that had piled up against it, so we crossed it like bears, so some other woodland critter.

Once we all made our way safely across, we continued on down the trail. The loop we were heading on ventured away from the creek, so it gave us time to dry out. We were actually on the lookout for bears because there were signs everywhere. Hair, scat, multiple trees with obvious bear scratches. But between our 10 feet, crunchy leaves and two little boys who like to talk, we couldn’t sneak up on anything, which I suppose was a good thing, but we would really like to see a bear.

Eventually our loop led us back to the creek, and while everything started out fine, it didn’t stay that way for very long.

Surprise! All the rain that had fallen over the last month had flooded the trail, so while we were almost dry, it was time to get wet once again. All except Catheryn, who clung like a monkey to her daddy’s back. 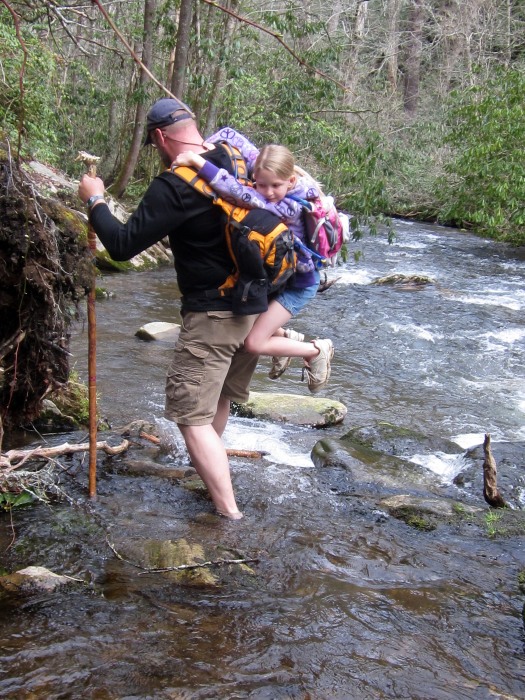 It was not too far past here when William came running at me with… something. After the venomous snake encounter yesterday, I was a little gun-shy.

Surprise! At least it wasn’t a snake!

We had all but given up the hope of ever being dry again. It just didn’t seem to be in the cards today. The trail made its way back out of the creek and we continued on our merry, although somewhat sloshy, way.

Surprise! Are you kidding me? Another missing bridge??

We were trying to decide the best place to cross when we came upon a little trail someone had marked. It led to a tree that had fallen across the creek. Rob crossed first and then went downstream in case anyone fell in trying to cross it. Luckily, nobody did.

7.4 miles and 5.5 hours later, we arrived back at the beginning. We had to cross the main creek again in order to get back to the car, but we were already wet so it wasn’t nearly as bad as the first time across. Unfortunately, Rob twisted his ankle a couple miles from the finish. It is sore, but hopefully it won’t take too long to heal up.

Overall, it was a great day full of… surprises. Lessons of the day: expect the unexpected, be grateful for bridges, and don’t be afraid to get your feet wet.

6 thoughts on “Word of the Day: Surprise!”